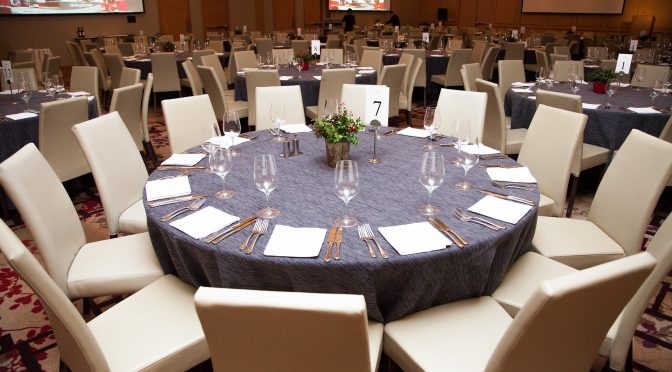 At the end of November, Downtown Porsche rung in another holiday season with DFC Auto Group’s annual Holiday Party! The night brought together the staff of Downtown Porsche and sister dealership, Audi Uptown to participate in festivities and celebrate all the hard work, achievements, events and milestones of 2016.

Held at the elegant and luxurious Shangri-La hotel, everyone blended right in as they traded in their name tags and uniforms for sharp suits and dresses. As guests entered the reception room, they were greeted by the sounds of The Farrucus Duo and Asian-influenced hors d’oeuvres in classic cocktail party fashion. Alongside cocktails, mingling and music, a photobooth was set up by Flow Photo Snapshot Photobooth with plenty of fun gear and props to play around with. The high quality photos were printed instantly and slipped into a plastic cover to protect the memory of the night. If guests desired, they could opt for a more classic picture of themselves – that is, hand-drawn by caricature artist, Michael McDonnell. The popularity of this option proved evident by the line that formed all the way to the back of the room! With all of the entertainment arranged for the staff, it was barely noticed that there was still dinner to come!

The roughly 200 guests were ushered into the dining hall and seated among the tables of the Queens Park Room. Charismatic MC, Andre Vashist, welcomed guests, then invited Mr. Constantine Siomos, VP of Operations, to greet the staff and introduce CEO and Dealer Principal, Ms. Helen Ching-Kircher. She started by thanking all special guests for attending that evening, then continued on by recognizing key members of management. Finally, she thanked the entire staff for their commitment and hard work displayed this year. The time to recognize continued, as in previous years, with glass plaques distributed to staff members who have been with the company for 10, 20 and 30 years. Shortly after, tables emptied as everyone filled their plates with the delicious buffet of foods catered by the hotel.

For those participating in the first-ever DFC Singing Contest however, it wasn’t quite time to relax just yet. As a new form of entertainment this year, 2 employees from Downtown Porsche, and 2 employees from Audi Uptown were recruited to compete for the winning title. Round one consisted of each contestant singing one song evaluated by a panel of judges: Miss Piao Piao, Laura Farrucas and Gabriela Rodgers – all of whom are singers themselves. The contestant of each dealership with the highest score continued on to the final round. The 2 finalists sang their final song and the winner was determined by applause. In a surprise ending, it was decided that both were worthy of the 1st place title. Ms. Ching-Kircher congratulated all the contestants and presented them with little awards to take home.

As dinner wrapped up, guests slowly made their way back to the rooms of entertainment with The Farrucus Duo, magician and illusionist – Neil Coswell, and Gabriela Rodgers. In between performances, raffle draws took place for a bunch of amazing prizes – Costco gift cards, Raptors tickets, gift certificates to The Keg, and the list goes on! Afterwards, everyone took to the dance floor to close out the special night.

On behalf of Ms. Ching-Kircher, thank you to everyone – our clients, colleagues and our staff, for a wonderful 2016. We look forward to an exciting and challenging 2017! Happy Holidays!