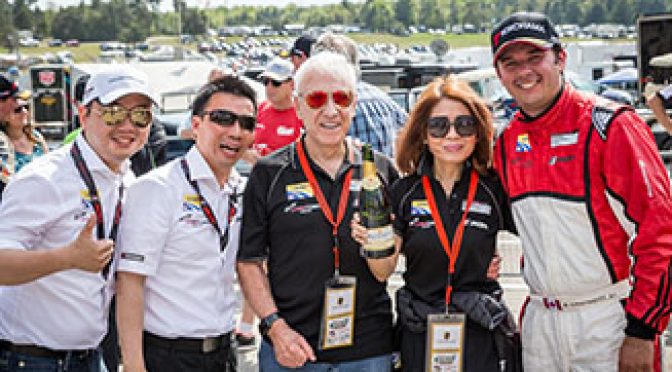 Downtown Porsche and DFC Motorsports is happy to announce the establishment of a racing team to represent Downtown Porsche, one of North America’s leading Porsche dealers. Managing of our Porsche GT3 Cup 911 program are Speedstar Motorsport.

With a proud heritage dating back to 1977, Downtown Porsche is the exclusive Porsche dealership in Toronto. The idea to participate in the race program is to help foster young driver development and help potential drivers get involved in motorsport, while also promoting the Porsche brand and Porsche sports cars.

Downtown Porsche was thrilled to begin the 2016 Porsche GT3 Cup Challenge Canada season at the Victoria Day SpeedFest at Canadian Tire Motorsport Park with a 2nd place finish in Saturday’s race and a 1st place victory on Sunday May 22nd, 2016.

Driving this year’s Downtown Porsche sponsored entry is Bruno Chapinotti, who was a rising karting star in his native Brazil while racing against – and beating – future elite open-wheel stars such as Formula One’s Felipe Massa, Bruno Senna, Nelson Piquet Jr., and others.

“Thank you to Downtown Porsche and the whole team for their support in this year’s campaign,” said Chapinotti. “With a victory in our first weekend we look forward to even more success down the road.”

“In the IMSA Porsche Ultra 94 GT3 Cup Challenge series, we’ve found a great way to bring our long-standing commitment to Porsche to life in both the dealership and at the racetrack,” said Helen Ching Kircher, Dealer Principal and CEO of Downtown Porsche. “Working with Albert and Frank, we’ve got a great fit and the perfect partnership to take us into motorsport competition.”

“Toronto is one of the most multi-cultural cities in the world, our diverse customer base represents every walk of life in our beautiful city” said Ms. Ching Kircher. “The global reach of the series we’re participating in, coupled with the diversity inside our motorsport team truly appeals to the values we feel are important as a leading business in Toronto.”

Downtown Porsche is part of the DFC Auto Group, one of the Greater Toronto Area’s most respected and leading luxury automobile retailers. Founded in 1977, Downtown Porsche has a long standing commitment to conducting Customer Driver Development programs at the Introductory and Advanced levels at Canadian Tire Motorsport Park, including being the first Porsche dealer in the world to hold a Women’s Only Instructional Program. With a proud history supporting local arts and charities, the business remains an important employer and vital contributor to the vibrancy of Toronto.