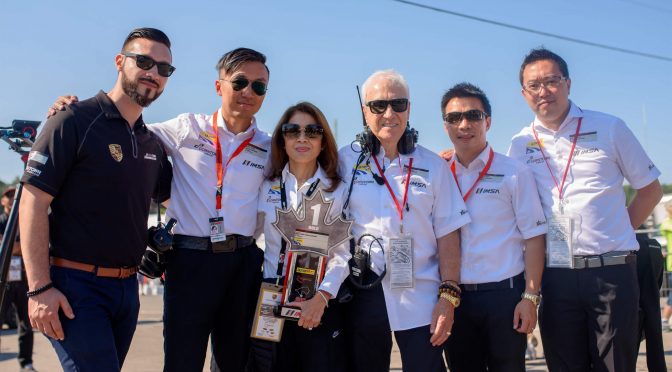 Over the Labour Day long weekend (Sept. 2-4, 2016), the Downtown Porsche/DFC Motorsport team wrapped up a great season with a strong 1st place finish in the last race of the Ultra 94 Porsche GT3 Cup Challenge Canada by Yokohama.

Downtown Porsche team driver Bruno Chapinotti explained “It was a great race. I couldn’t let up at all and the car worked flawlessly. After the glitch on Saturday, to bounce back and take 1st on Sunday was a testament to the team and all of our commitment to winning!”

The weekend began strong with Chapinotti posting the fastest practice time for the GT3 Cup Canada Gold series. The team identified a transmission concern and replaced it in time for the Saturday’s qualifying round. On Saturday Chapinotti was only 1/10th of a second behind the race GT3 Cup Challenge Cup leader. By the afternoon the team was confident a podium spot was in the cards. But 20 minutes in to the first race an unexpected oil line issue brought Chapinotti in. But not discouraged, the team identified the problem, and worked until the early morning and got the car ready for the last race on Sunday morning. Neither car nor driver disappointed and Chapinotti placed 1st with a comfortable 2.5 second lead.

“We are so honored by the dedication and commitment to excellence that the entire Downtown Porsche/DFC Motorsport team has shown throughout the season” said Helen Ching-Kircher, Dealer Principal and CEO of Downtown Porsche. “Everyone from Bruno Chapinotti’s brilliant driving to Albert and his team of the best and most committed technicians in the industry has made this season one to remember. As I said in the beginning of the season, with the GT3 Cup Challenge series we have found a great way to bring our long-standing commitment to Porsche to live in both the dealership and at the racetrack. We could not be prouder of what the whole team has accomplished this season and we look forward to next year.”